What an awesome day to be swimming through the majestic waters of Coolangatta in the Cooly Classic Ocean Swim. 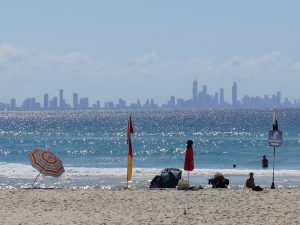 It is the start of April and a few hundred competitors line up to do the classic swim.

Today is a special day  for me- a day when I was returning to swimming (following my near-crippling neck injury) . It is also  the first ocean swim my nine year old son has done.

We both agreed to ease ourselves into it – my son opting for the 300 metre swim this time and myself the 1km.

The day was so well organised, no stress, no over zealous organisers, just let’s all have some fun, and as the lady on the starting line said “look after each other”. 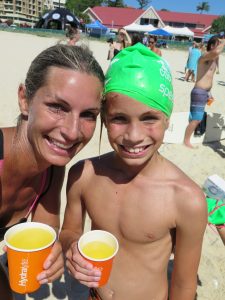 Finishing at the Cooly Classic 2016

The small talk on the beach before taking off is always interesting.

Some people are taking it really seriously and not up for much chat. Others are in it for the personal challenge and others are in it and truly regreting it… It’s a mixed bag and I think talking to total strangers in your togs is always liberating. Bare bodies, bare personalities and bare facts. I like it!

Today the thoughts going through my mind were about feeling happy and successful.

To get to this point, the point of standing on the beach at Coolangatta  in my togs ready to swim 1000m has been a long road.

It doesn’t sound like much but after my neck injury a few years ago it was a huge moment.

No one will really know what it felt like 3 years ago when I thought I would never be able to swim again.

At the time, I saw two neurosurgeons and they both muttered I was lucky not to be in a wheel chair: “..This is an injury we see with car accidents...”  but I had been hit by a guy in water polo. 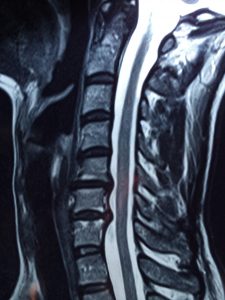 Over the month following the injury I lost 7 kgs, couldn’t use my left arm and had issues swallowing. I was in pain regularly and sleep was nearly impossible.

I decided though, after hours of crying and hanging in the neck brace that I did not have an option. I had to get better.

I did what the surgeons said, I considered their surgical offer, a fusion, but decided I would see if I could fix it myself.

Over the last three years I have seen my friends – both chiropractors, who I believe have helped me heal. Dr.Jay Miller is awesome and has been a close friend for years, and then last year, I swapped to Dr. Kieran Crowe as he has a different technique. Both very good and over the year my pins and needles, pain and awareness of the injury dissipated.

Two weeks ago an uber driver told me about the Cooly Classic  and said he was swimming and I should check it out. I did then I decided.

I decided to do it.

I hadn’t swum for weeks but I knew my heart and determination would carry me over the distance. I just didn’t know how much I would enjoy it.

Over last week I did four swims and they were pretty lame and certainly no where near the 1000 meters I need to be able to swim but I knew I could do it.

And then I stopped thinking about it and just started trusting.

I trusted the fact I had always been a swimmer.

I trusted the fact that even if my fitness let me down I could breast stroke.

And I also trusted the fact that if everything caved in there were plenty of event life guards to rescue me .

This clip is funny…

Off we went…. striding through the ankle deep, then knee deep waves…. until I tripped, like most, and decided it was time to swim. 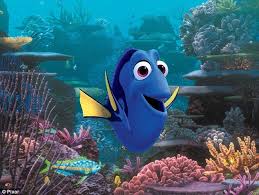 Unlike other ocean swims where you can’t see the bottom, (and can spook yourself),  the water here was crystal clear and relaxing.

I feel like Dory in the Movie Finding Nemo when she is released to swim again. The new “old” world opened up.

The Underwater World is incredible.

Around Coolangatta and Kirra even more incredible.

I can’t describe it entirely but I wish I had swum with a go pro.

It’s the sort of thing you could watch over and over at night to wind down… add some beautiful back ground music and I could fall asleep to it. It was hypnotic, meditative and empowering. Just me, my intact neck and the magic blue ocean.

I love it and it was FUN!

At the end I found a little reserve to do a beach sprint (always a self conscious moment for a mother of three) but I gave it my best.

I had a few minutes at the end when the adrenaline hit me and I nearly wanted to vomit but I am sure it was a mixture of physical exertion and emotional over whelm.

After my swim I raced over to watch my son. 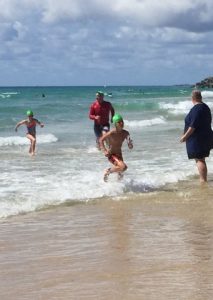 Kalani running out of the water in his first ocean swim

He ended up loving it too and found his competitive spirit coming out of the water.

All afternoon he relived his moment of glory and wanted to know his time. A transformation compared to his mindset before the swim!

Everyone swimming would have their own reason for swimming and their own personal stories just like mine. That’s what makes these events special. People pushing themselves outside their normal boundaries. 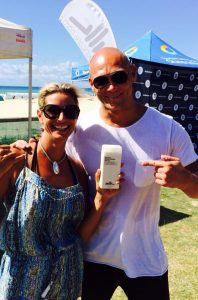 After wards there were a few sponsors and co-sponsor was swimming legend Michael Klim.

Michael had won a few medals in the Olympics and has been a lot of older swimmers icon. He had plenty of time to spend with the kids and adults and was inspirational for all.

I will be checking out his baby and adult skin care range called Milk & Co.

After the swim we headed up to the Kirra Surf Club. Along with neighbouring clubs – Rainbow Bay, Coolangatta and to the north, Currumbin, Kirra boasts one of the best views on the Gold Coast…. and no one knows about it.

I am looking forward to Noosa swim now and so is my son and friend that came down.  We are thinking about making the weekend a family weekend and hiring a house and taking a few people up. I can’t wait.

Thanks guys for a wonderful event and for getting me back in the water.