This is my humble recollection of my few days in Lombok helping out after their recent earthquake.

I would love any support circulating this blog to raise awareness of this island struggling and in need of help. The major earthquakes occurred late July and continued until the end of August. 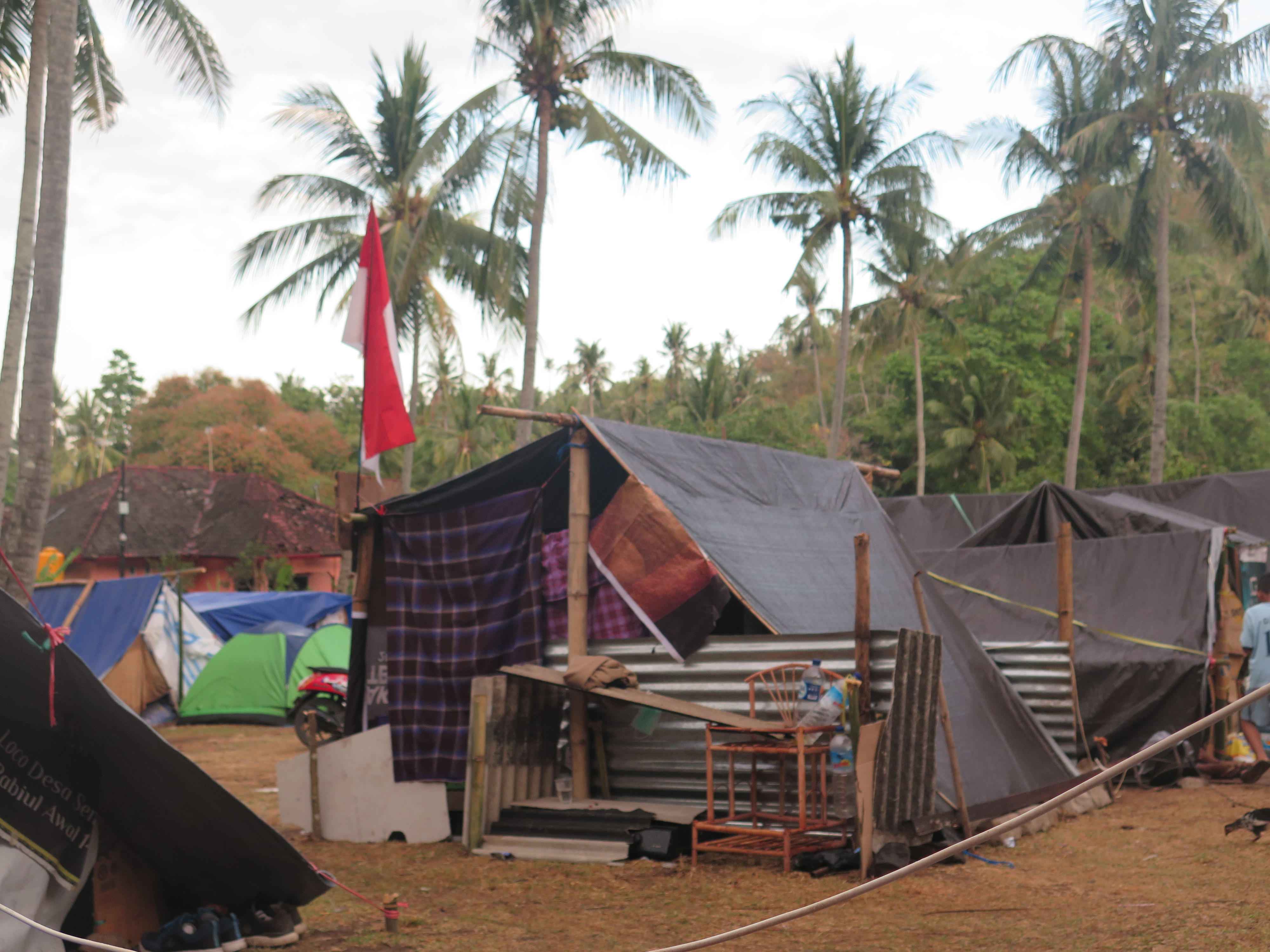 This is one of the tent set ups that will see people in Lombok through the next 6-12 months while the island rebuilds.

Traveling to Lombok ten days after the big earthquake and five days after the third significant quake I was apprehensive. I had no idea what to expect and wasn’t too sure what I could offer, except that I had an urge to be there to offer help.

With a major charity drive going on in Australia to support our farmers at the time of my departure, many of my friends felt my efforts were going in the wrong direction and was high risk.
I reassured them that I did support our farmers and believed that the best way to do this was through shopping at local markets and independent butchers. This was a humanitarian call. One I had to reply to.

So off I went, a sole female traveller from the Gold Coast.

I knew it would be tough.

My driver in Bali put me in touch with his friend, who was also a driver (in Lombok).

Dani invited me back to his village (after gaining consent from the village chef). I was to spend a few nights on the still trembling earth with his village.

Over 250 people were living under tarps in his village, which contributed to the 600,000 people who were displaced without their homes and living in emergency shelters.

Many of the buildings in the north had fallen to rubble with the vibrating earth. Estimates were that only 10% of buildings remained upright.

The chaos and falling buildings had left over 460 people dead, and over 70,000 homes destroyed. This is greater than than the size of Toowoomba – all destroyed. It is the massive human displacement though that is the real issue. No electricity, no access to fresh water, sewerage and food.

Don’t ever underestimate a positive impact!

I had taken my own supplies so I didn’t add to the mess.

Pitching my tent on the first night everyone was intrigued. Who was this woman, why was she here? Every other westerner had fled the previous week.

Curious people would approach me and be keen to connect. They kept telling me how their buildings were “broken” and the distress was obvious in their faces.

Yes, I would agree, they are broken. 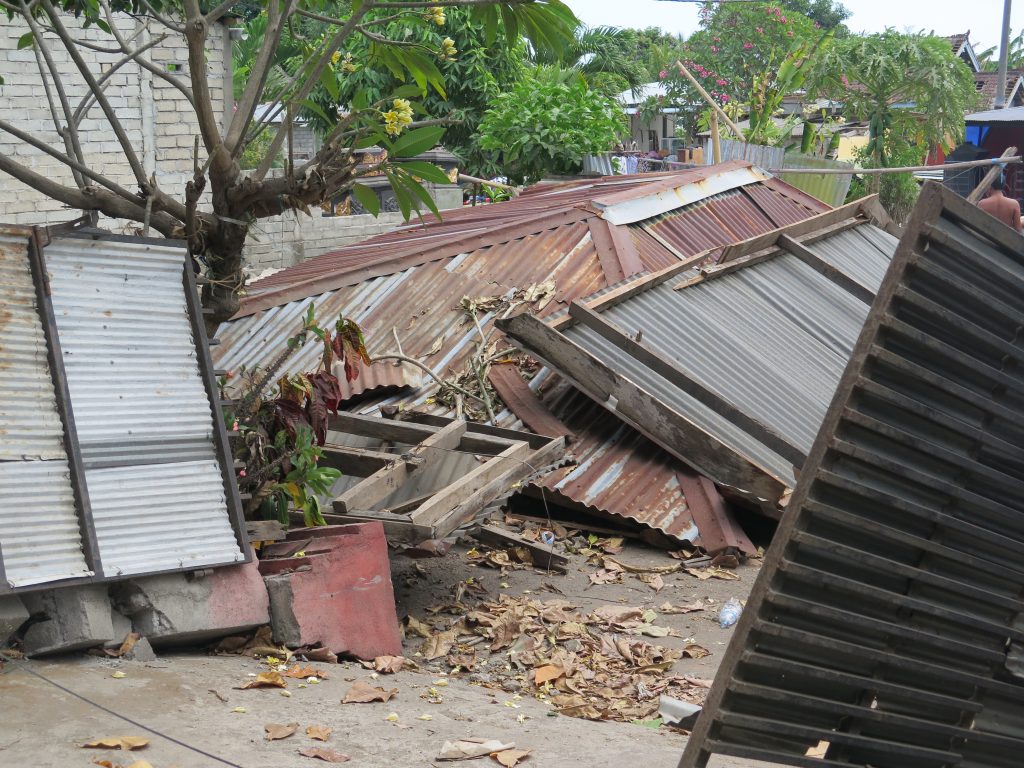 The buildings were broken and so were the people’s confidence.

The next day, I met with Glen Hulley, the director of a NGO, Project Karma, that does work in Indonesia to help prevent children sex trade. It was Glen who informed me that whilst many volunteers had the best intentions, unless, as nurses, we were registered in Indonesia we could be at risk of liability and recourse. That put me off instantly. I wasn’t going to put myself in any precarious situations despite being a trauma nurse with 25 years working in various emergency departments.

I had bought over some supplies and donations.

The most useful being 2000 face masks that had been donated by 3M.

The women beside me on the plane (business) asked everyone to donate their blankets, so I had 30 blankets, kids toys that I had purchased in Australia, including two clown outfits, $300 worth of colouring and sticker books and food.

After my meeting with Glen, I decided not to be a vigilante but to check out the north where all the damage was and distribute the goods. We passed by the markets and I purchased tempeh, vegetables and chicken. For the last 10 days, the army had been distributing rice, noodles, tobacco and coffee and some water. Many places were still without fresh water and news was trickling through social media channels that people were dying due to dehydration.

After dropping off the food to be distributed amongst the village, we headed north. 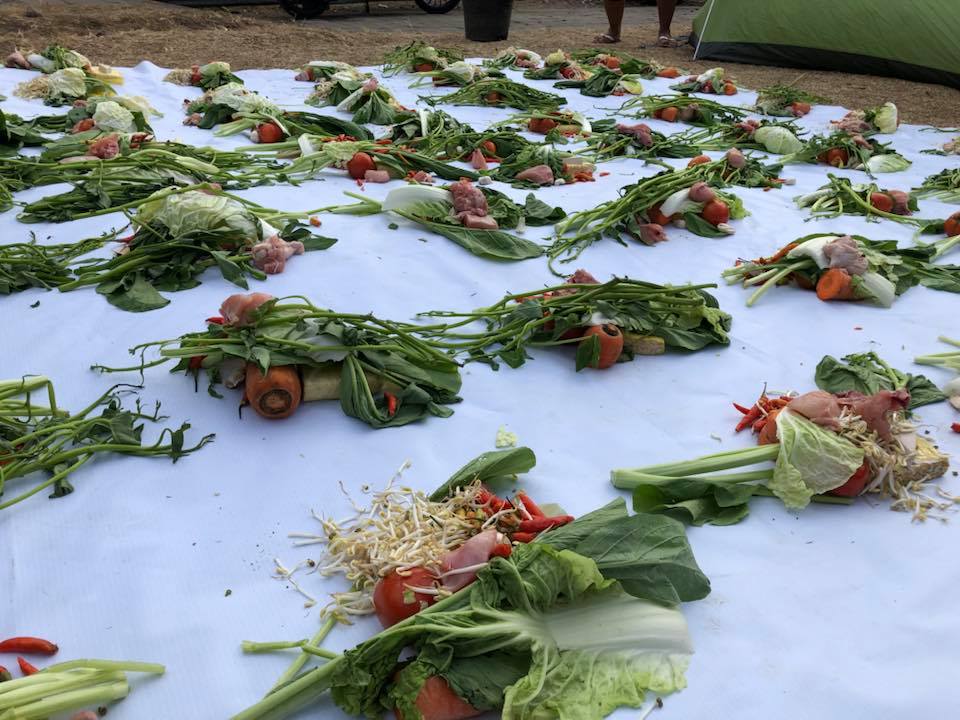 The seaside beaches and villages became obviously more damaged until it was obvious we were in the thick of things.

We would stop the car and I would distribute face masks, goods and food.

The necessities for Lombok! 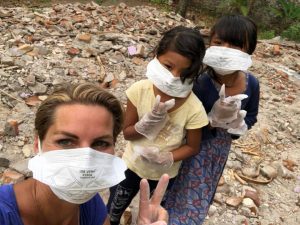 Handing out masks to locals shifting through rubble and coming to grips with the fact that their homes were destroyed was heart moving.

It was more than the mask that was handed out. It was a gesture that there is hope, that people do care, and that somehow amongst the rubble their lives would get back on track.

I experienced many wonderful moments in those interactions, despite the north of Lombok, including the ground, being fractured and broken.

That after noon, my driver and I headed back to camp. 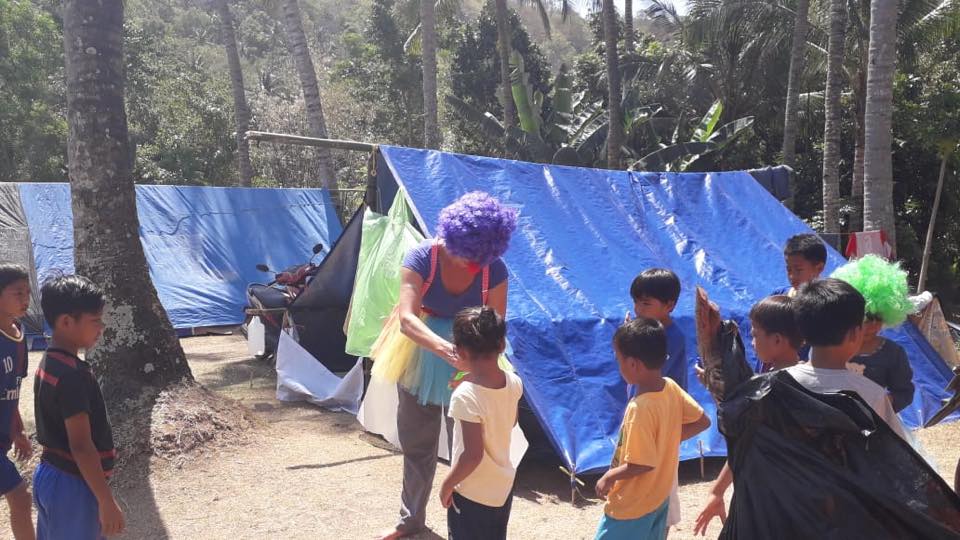 I had brought over two clown outfits with a crazy idea I would dress up like Patch Adams and make the kids happy and forget the trauma of the previous two weeks.

Uncertain but enthusiastic to cheer up the kids, the clown idea was a hit.

Like the pid piper I ended up with a large audience very quickly.

Showing the kids how to make bubbles, juggle and be silly was incredible. The kids forgot everything and became kids again.
Laughter, smiles and joy.

There was hope again.

Later that night, exhausted, I was fortunate enough to part take in the normal Thursday night singing and prayer. Not knowing much about the muslim religion, I was delighted that I was embraced as a human first and was greeted with smiles and still more curiosity. Who was this woman?! I could see in their eyes.

Unified we sang, swayed and shared a beautiful night.

I headed back to Bali after doing more of the same in the morning.

Whilst in Bali, I experienced four earthquakes. Two of which rattled my being beyond words.

The fragmented shaking and vibrations of the earth, the sheer power, the sheer confusion, really throw your clarity and decision making. I can understand why the people of Lombok are confused, bewildered and feeling lost.

I just hope the aid gets to the right people, and the rebuilding begins so people can continue with their lives.

If people would like to donate, they can give to Project Karma at: http://www.projectkarma.org.au

Can surfers and surfing help Lombok?

They told me that Mick Fanning and Joel Parkinson were their idols. Both of the boys had lost their boards in the earth quakes but fortunately had a couple of spares.
We sent a cherio to Joel Parkinson which greatly raised the kids spirits. They started day dreaming.. imagine if Joel or

I am hoping Joel and Mick will travel to Lombok to meet the two boys who changed a village just with their sheer enthusiasm and love of the ocean and waves. At this stage I will look into writing a book for the boys about surfing in Lombok and see where it goes.

There is so much to be done to help this recovering land and we all can make a difference.

Don't Vote for the Sausage on Australian Election Day.
Hysterectomy or not?
How do you treat poly cystic ovary syndrome?
Protect Your Heart