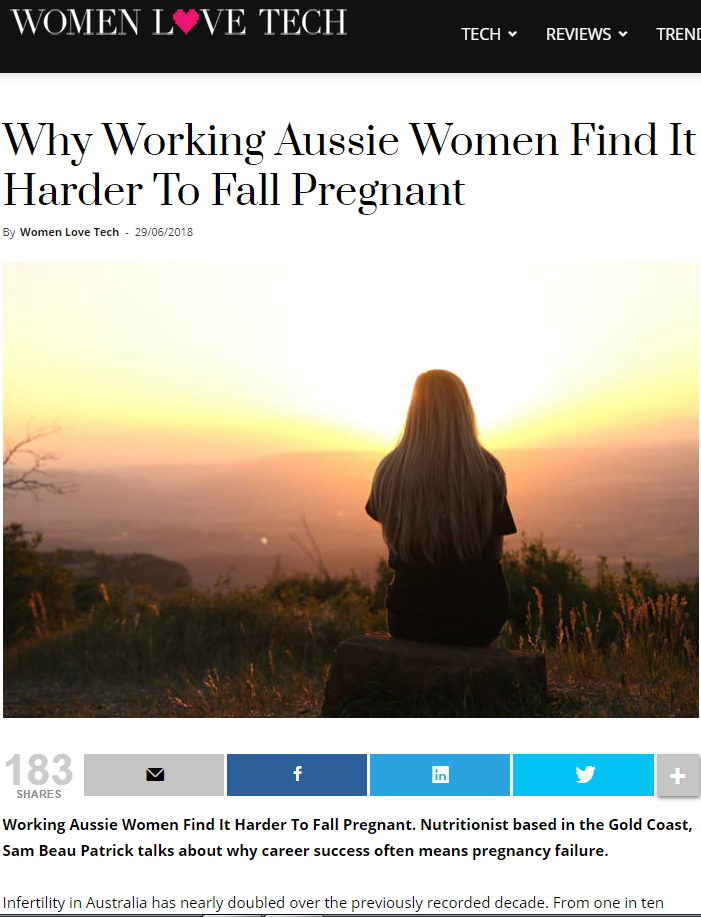 One of my articles appeared in Women in Tech.

Read the article on their page or here.

Infertility in Australia has nearly doubled over the previously recorded decade.

The number one cause is a hormone imbalance called poly cystic ovary syndrome (or PCOS) which is
a problem where women produce too much testosterone.

It reportedly affects up to 75% of infertile women and a staggering 20% of fertile women in
Australia. Many not even aware they have the issue.

The current medical approach for these couples is diabetic medication to control the rising
testosterone levels and IVF.

Gold Coast Nutritionist and published fertility author, Sam Beau Patrick, has been assisting women
(and couples) in this area for over 15 years with astounding results.

“Understanding the drivers of poly cystic ovaries (high testosterone and high estrogen) in women is
key. These can be managed successfully through lifestyle measures that don’t cost much money!
Understanding what foods to eat, what exercises to do and how to “refeminize” are all key
strategies that lead to lowering of testosterone levels”

There are a variety of factors that drive up testosterone in working women including a high
pressured job, fast foods, working long hours and women working in male dominated industries.

According to ABC news:

– Around 34,000 women a year have fertility treatment
– IVF costs Australian taxpayers around $250 million a year in Medicare rebates, with no limit
on the number of cycles a woman can receive a rebate for.
– One cycle of IVF can cost up to $12,000 with many couples needed 2-3 cycles

When PCO sufferer, and corporate worker, Mrs Esire Ponce initially wanted to become pregnant
with her husband Andrew, they were told it would be difficult.

Doctors told her that her hormone imbalance would likely mean she would need IVF as some stage
or to get ready for the worst – that she may not fall pregnant at all.

Determined to do it “naturally” Esire called upon Sam Beau Patrick’s advice and fell pregnant
naturally, without the trauma and need for IVF.

Now 26 weeks pregnant, Esire says “falling pregnant naturally has been the greatest gift. We are so
excited for our little baby and what our future holds as parents..”

Sam helps people in her clinic balance PCO, and other hormone imbalances.

You can order a hormone test and consult, or JOIN one of her successful programs.

Interview with Sam and TV legend, Lisa Wilkinson
Avocado Egg
Does the Pill cause Depression?
Do you Suffer with Anxiety in the Morning?
×
Scroll To Top