A few weeks ago at a course we were asked whether people are born with rights.

At the time I had answered “no” as I see every day as a privilege not a right but after a round table discussion agreed that once born as a human on this planet we are assigned certain rights.

These are things such as right to safety, food, shelter, love, etc. I knew Nepal would shake up the rights I see people fight for in Australia and the rights not even on the radar here. THe rights that women have to dignity, to saying “no” , to working for little to no money and other exploitive issues. I knew I would be in for a life changing experience.

So now I sit slightly over whelmed and definitely perplexed in the courtyard of my hotel in the heart of Thamel in Kathmandu. Nepal has been an absolute eye opener to say the least.

The people, the sights, the noise, the poverty.

The last six days have been remarkable but in particular the last 24 hours. 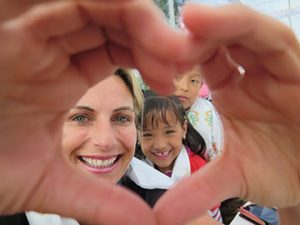 Yesterday (after watching the sun rise over the Himalayas) we went on a four hour trek through the villages in the mountains.

After discussing the horrific waste issues (people just dumping rubbish throughout the forrest, we decided to start the first “Clean Up Nepal” campaign. Filling our bags with rubbish – so much plastic to dump in the next village for burning. Interestingly despite having 27 million people, Nepal has no waste management system. Instead discarded items make it to the street or to a fire.

There were many amazing sites on the walk and I gained a massive appreciation for simple village life. Seriously most of them live upstairs in their mud brick homes and the live stock live below with the hay and stock for the oncoming months.

Life is simple but kids still attend school and seem so immaculate and polished in their uniforms.

Now the scene is set, let me take you on an insiders view to the three remarkable hospitals that we visited.

The Hospital and Rehabilitation Centre for Disabled Children was breath-taking for me. I have always visioned myself playing a Lady Di role with hospitals and children over seas and yesterday I felt it stronger than ever before. I was inspired, motivated and humbled all at once.

The beautiful children, many in legs casts for corrective surgery, were amazing. Amazing little spirits whose faces lit up when approached and talked to.

One boy, who was 15 years old, confided in me that he has never had his photo taken. So I took a photo for him and then he said ” I don’t have very nice teeth” and was clearly embarrassed by it. They were quite crooked but white and shining and his smile was magnetic. I said to him “it doesn’t matter what your teeth look like, people only notice your smile.” And his was magnificent so I know he will have no worries.

Then others started requesting to have their pictures taken so I took a few and had a few words to each. Something magical happens when you reach out to sick people, people suffering or those with less. I don’t know why but by the end of it I found myself grinning from ear to ear and feeling remarkably warm from the inside out.

This darling girl was a muslim and normally they are quite shy, but she was the opposite. She was cheeky and affectionate and had no problems drawing me in with her very strong arms for hugs. In fact her hugs felt like a tackle and I loved every minute. I gave her my red long t-shirt to replace her grubby one and hope she wears it with love and feels inspired to do what ever she wants in the world. Especially with her new leg developing. She had a severe deformity of her leg and hadn’t been able to walk. She had corrective surgery and her cast must have weighed 4-6 kg! So heavy for a girl so slight.

The room where they make the prothesis and club foot boots was also humbling. A third world country hospital offering a class one service.

A relaxing night and a warm deep sleep for me.

The morning was off to Dhulikhel Hospital for grand rounds with Dr Ram and his team of doctors and registrars. 37 Emergency presentations in the last 24 hours, 17 admissions. 3 people in Intensive Care. A dispute evolved between the director of the hospitals and the Surgical specialist. One of the patients in ICU had hepatic encephalopathy (alcohol induced) and a blocked bile duct. He will definitely die without intervention and my naturopathic hat didn’t switch on for a second but my pragmatic nursing hat did.

“Why have the family not giving consent” the director asked. “If he has surgery he will have a 5-15% chance of survival, if not he will die”. The Surgical doctor replied “The family do not give consent and do not want the operation.” The director wanting to save someones life insisted that the surgical doctor talk to the family again and if consent can not be acquired then they would operate anyway. Chills ran through my bones.

I have seen this attitude and approach at home. I do not like it one bit and it is against my values. But sometimes this is how it is in large medical facilities. Now don’t get me wrong. I am not passing judgement on the director and his approach to treating this patient. I just believe there are two sides to every story and it is always worth abiding by other people’s values especially when it is their body.I think sometimes by consenting to being admitted you are relinquishing your control over your outcomes.

I asked to go down to Intensive Care while our amazing Mother Theresa equivalent, Anne went to chat the director about a hospital they are planning on building.

Down to Intensive Care to meet the staff and patients. What an experience. A young woman was there following organophosphate (OP) over dose. Something you just don’t see in Australia although earlier in my Intensive Care training I had seen two.

She was hyperventilating and non-intubated and her figures on the screen looked ok. The Anaesthetist a darling doctor asked my opinion and took me through her bloods and treatment. She then asked what she should do. My gut feeling was that although her “stats” were ok, she was not and would be dead if left non-ventilated.

She agreed but due to the nature of OP overdose they dip in 24 hours and then again in 10 days so they electively intubate for 11-12 days. This is where the dilemma starts. Each day on ventilation costs $25USD. The family were informed of this cost (as they must pay) and being from the village they didn’t have the money. Fortunately for them the hospital has a buffer system that will pick up the cost for poorer village folk. I spent a few hours there while this was going on. Interestingly the husband of the women (who was only 25 years old and had 2 children) decided not to intubate and said he would take her home. All of us knowing that she will probably die from complications down the track. Interesting case to say the least.

Suddenly I had become part of the ICU team managing these patients who were really about ethical dilemmas as much as medical ones. Who pays, who decides and whose life is it anyway?

The nursing staff wanted to discuss the patient with liver failure and asked me to come into their meeting room to discuss.  Who also had bleeding issues, cerebral irritation, a fractured leg, diabetes and hypertension. What is appropriate. I said I believed in his case that not operating was the best option and to back the family. Are we not bound to do that anyway?

From there back to Kathmandu to an amazing hospital. One I never thought I would see or walk through. A maternity hospital that delivers 70 babies a day. The figure sounded surreal but when we were in the labour ward one woman had just given birth, and one was birthing. Three beds in a row!

Another was delivering in the birth suite (for low risk mothers) and many were lying around with their newly hatched bubs. Distressing for me was the two guys varnishing the beds with highly toxic and pungent fumes permeating all around these hour-old babies. I could barely breath so I was unsure how these swathed darlings were going to cope. Onwards we walked. What else can you do. We were guests spectating a truly surreal phenomena. Mothers and babies everywhere. Dirty floors, filthy equipment, recycled “disposable” gloves and massive turn over. The staff were friendly to us but certainly looked quite mechanical and non emotional to the women they were there to support. Maybe you become that way?? 18-24 women to a room, wriggling in labour pains, recovering or on their way home. I said to Anne, I felt like I had walked into a scene from 30 years ago that didn’t (and couldn’t) exist today.

In an order to curtail neo natal mortality and maternal mortality mothers are encouraged to come into hospital to birth. Receiving 1000 rupee (approx $10USD)  if they do. But there was no dignity, no right to privacy and no rights at all.

It has been an interesting day challenging me to what I think are rights versus WHO rights versus the rights that hospitals give you. There is a vast difference between the last two.

Anyone can come on this journey. This is the website http://www.healthcare-helping-nepal.org and if you wish to donate, I can assure you it goes straight to the people that need it. This is the account for a nurse that we are sponsoring there.  Saru (the nursing student) is BSB 193879 and account number 447950926 Account name Saru sponsor account.